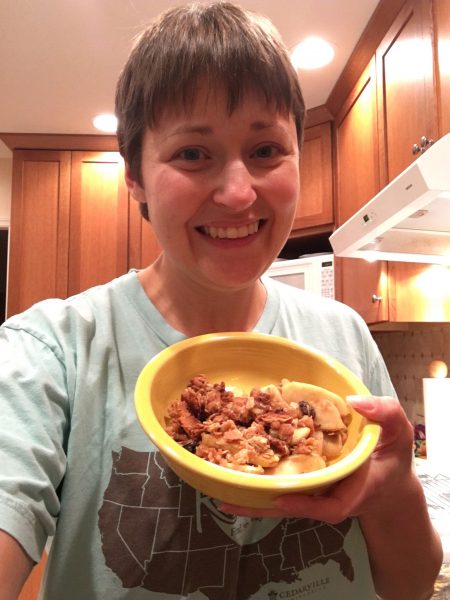 Place a rack in the center of the oven and preheat to 350 degrees.

Put the golden raisins in a small bowl and pour boiling water over the raisins to cover. Let sit for 1 hour. Drain the raisins and discard the soaking water.

In a large bowl, combine the apples, raisins, honey, cinnamon, and salt, and toss to coat. Place the apple mixture in an 8 inch or 9 inch baking pan with 2 quart capacity.

To make the topping: In the same bowl used for mixing the apples, with a wooden spoon, mix together the oats, flour, cinnamon, and salt until evenly combined. In a small bowl, whisk together the butter, honey, and vanilla; drizzle over the crumb topping and mix until well incorporated.

Spread the crumb topping on an ungreased baking sheet and bake for about 15 minutes, or until the topping just barely starts to brown and dry a bit. Remove from the oven and, using a spatula or spoon, carefully scrape the topping from the baking sheet and sprinkle evenly over the apples. Bake for 40-50 minutes, or until the topping is crispy and dedp golden brown and the apples are tender. Let cool on a wire rack for at least 30 minutes before serving. The crisp can be stored, well wrapped with plastic wrap, in the refrigerator for up to 3 days. To serve, rewarm in a 300 degree oven for 10-15 minutes.

Peel, core, and cut apples into slices. Toss apples in a little bit of honey and cinnamon. Place on parchment paper and roast for 12-15 minutes. Cool for 15 minutes before serving. 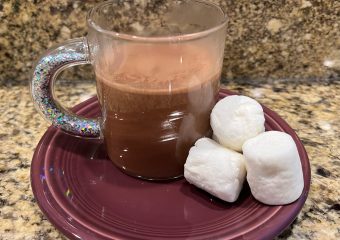